The rule says that the total of the first rounds should not exceed 20% -25% of the startup's capital. 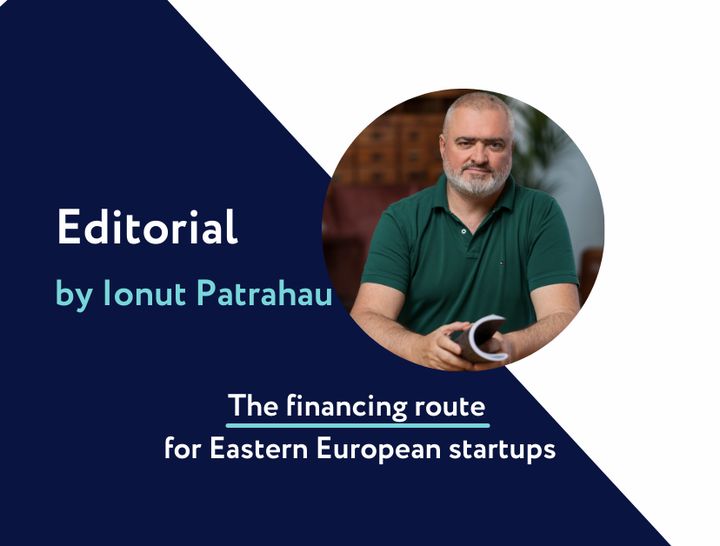 Editorial written by Ionuț Pătrăhău, Managing Partner & Corporate Development @ SeedBlink.  In addition to his vast experience in banking, Ionuț Pătrăhău also worked in the medical services field, being former CEO of the private health network Regina Maria and co-founder of the Brain Institute, a neurosurgery center developed in partnership with the Monza Hospital.

The journey from an idea to a viable startup is beautiful and difficult at the same time. In most cases, the biggest problem on this path is the uncertainty, i.e. the moments when we realize that we do not know how to do certain things and, even more, when we have no idea what we do not know.

There are many such moments. The good thing is that we might not reach all of these thresholds, although some will be crossed at some point if we want to get on the funding chute, on which, once started, there is no simple coming back.

What’s at stake? First of all, it's about exercising "ownership," an exercise we often take lightly, rallying around us all sorts of resources, friends, co-workers, people who might help us at some point, or people we think might be useful to us.

The beginning is simple: no one bets money on us, so the mistakes we make seem “free of charge”. The truth is different, however, and we usually have to go through these challenges at least once, so that the second time we’ll know how to tackle them.

Talking about mistakes, we can identify few main types:

In this case, you gather around people who either have the same appetite for entrepreneurship or have already gone through this experience. Shortly, you may find yourself in a situation where you own a third of a business but you are the only one actually working on it. It's a situation that certainly requires adjustments, and these become more difficult as time goes by.

You embark on this adventure alone and soon wake up, still alone, in a sea of challenges that you either don’t know how, can not, or do not want to solve. It's another undesirable situation that often requires a fresh start.

This is could be technical skills or those related to the company management (e.g. if the founders are all IT people).

There are no easy solutions to any of the above, and in most cases, you’ll go through one or more "divorces" caused by major misunderstandings, and leading to restructuring the original company. There are certainly many combinations of the above, some having a chance for success, but most being recipes for failure.

This is one of the reasons the investors look closely at the team when evaluating your funding opportunity. If you have ever wondered why they do this, here is the answer: there are many combinations in which true collaboration remains a desire as the chemistry does not really exist.

As if this phase of defining a team with different skills and synchronized dynamics was not enough, there's another problem closely related to the process of finding external funding for further company development: the shareholders's structure. This is the Cap Table, which investors request to see quite often, and which must be structured in such a way that the founders who actually work must retain their share majority, even after about three rounds of funding.

That's one of the conditions without which most VCs will not consider the startup, no matter how well the business is doing. The good thing is that it's relatively easy to reshape the shareholders's structure if everyone involved has in their minds the best of the company, and if everyone understands that it's better to have a thinner slice from a growing company than a larger one in a company that's going to stay small.

Obviously nothing is easy, even if not impossible. That's why it's good to know in advance how you should structure your business right from the beginning. But how do you lay the bricks in the right order so that the foundation can withstand the future, long lasting construction?

Firstly, we should know that the startup funding path needs a certain sequence. It is difficult to skip certain steps, and sometimes it does not get much easier even with your own money. Let’s talk about this first.

Funding a company on your own until it reaches maturity is most of the time a losing strategy. Why? Because along with its existence the startup needs validation from others, from the customers, investors, and from the market. If we discover that the direction is wrong, we’re much more motivated to steer when we consider our responsibility for others than only for ourselves. Then, we could suddenly realize that we have invested far too much in our own company, so that no one is interested anymore in a big round of funding, as the business was not tested and validated by the market.

So is it better to have no own money? I would not be that radical but, you do not need to invest more than your starting money to be able to sustain yourself until the first round of funding.

Going back to the classic financing scheme, we can define some phases that are prevalent in Eastern Europe:

(1) Pre-Seed - the phase where capital is needed until an MVP is completed, or until a market fit or a bit of traction is attested. This money often comes from family and friends or personal savings. It usually amounts to a maximum of 100.000 - 200.000 EUR, depending on the complexity of the product and the operating model.

(2) The seed round - where funding is needed to make your product known, i.e. to overcome the "gap" that is often an insurmountable obstacle for companies: moving from early adopters to an incipient mass market and validating the company's potential network effect. We are already talking about some revenue, even if companies are still losing money and most of their money goes into attracting a growing number of users, with smaller and smaller marketing efforts. The size of this round varies between 200.000 - 500.000 EUR, depending a lot on the valuation of the startup, but also on how much of the shares are transferred at each round.

The rule is that the sum of the first rounds should not exceed 20-25% of the startup's capital. If the valuation of the startup does not allow to follow this rule, it is usually better to fund in two consecutive steps, reaching the same amount in one year, but sharing less of the company if the second valuation is more favorable than the first one. Then comes the scale-up phase, the accelerated growth that leads to Series A funding, which is beyond the scope of this article.

Coming back to Cap Table, it is important to have an effective & motivated team composed of founders with different skills, without giving away more than 20-25% of the capital until we reach the Series A round.

Startups can succeed in a variety of ways. However, the ideal investors are angel investors, crowdfunding platforms, micro VCs, and true VCs that typically fund the larger rounds.

The theory, supported by the reality, is that the initial investors - the small ones - usually finish their mission when the big VC type or strategic investors come into play. Although it may seem complicated, this is the ideal structure of the Cap Table, which should be designed optimally right from the beginning. As said at the beginning of this article, this is just one of the challenges; but the better we know what to expect, the better we can tackle them all, without fear.