The main reasons for which a startup can fail 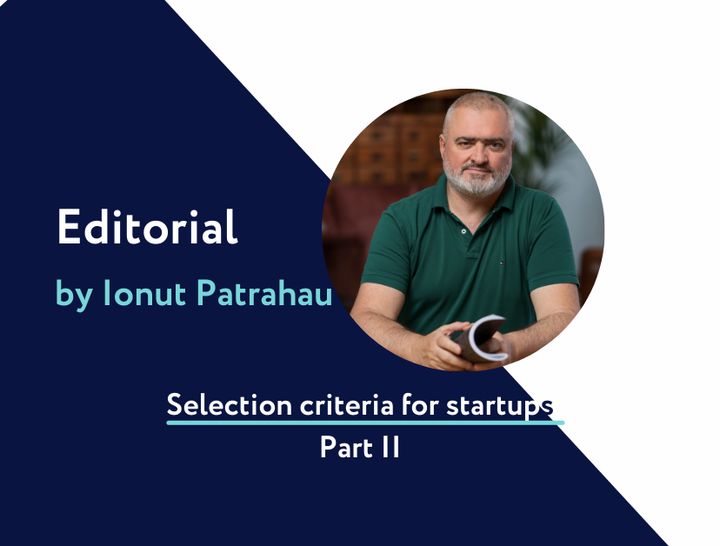 Our previous editorial shared the criteria we use at SeedBlink, to decide which startups will (or not) eventually launch a funding campaign on our platform.

The first part’s conclusion was that we refrain from judging and taking strictly procedural decisions, preferring to emphasize the skills brought in by each member to the risk management team and the board, as a decision-making body. This way, we avoid exemplifying the ironic joke "the operation was successful, the patient is dead", and encourage instead "what you measure is what you have".

When considering the KPIs and how important is to measure them in the context of assessing a startup's funding readiness, we can identify a list of factors that can cause startups to fail. It is obviously easier to identify the negative factors than the ones that guarantee a startup’s success because the path to success can have a myriad of intertwined detours that lead to the same result, even if not at maximum efficiency.

In the majority of specialty articles ranking the “reasons for startup failure” we can always find these three: lack of product-market fit, lack of funding, and lack of team homogeneity & consistency.

This article is detailing the “Lack of a Product Market Fit”.

The ability to communicate simply and clearly what your product can do for people, and how different it is, should be quite basic. In practice, oddly enough, we are far from these expectations, however. Sometimes even we struggle to extract the essence and identify the key message that should address the conscious or subconscious needs of users.

Most of the time, founders start with a short-term goal that does not match the reality anymore, as the business progresses. In other situations founders fail to identify a practical use case right from the beginning, imagining that their solution will change the entire industry instead of solving a specific problem. Those proposing solutions to theoretical problems do not find an audience, even if their product could have been impactful.

I met once a founder who was proposing a packaging solution that offered traceability, without having a practical application for it. Even though the solution seemed innovative and we could identify many scenarios in which it could have been implemented, the stubbornness to prove the uniqueness and "greatness" of the solution right from the beginning, made his efforts disperse among the more down-to-earth products enrolled in that competition.

We are not to judge the path of one product or another, from a strategic point of view. We’re just saying that pivoting the business can sometimes happen too late; unfortunately, the market does not wait for anyone and adopts whatever solution it has at hand, a better or worse one.

Failure or success in this case is related to the founders' willingness to pivot, and this relates to how supported by cash their will is. If the founders have enough money to continue in their idea, they will not feel the pressure of limited resources and therefore will not pivot fast enough. However, when the lack of money pressure is present, the founders will go by the book: will develop and test an MVP, as soon as possible.

In another example, we tried to push an extreme solution aimed to radically change consumers’ habits, towards a milder solution – still changing things, in a great proportion. Despite the fact the milder solution had more chances of success – being easier to understand by the users (leaving the drastic part to a later stage), the founders kept their preference for the extreme one – harder to understand and to explain even by them, wasting any theoretical chance for traction.

We’d all love to build the next Facebook but we forget that even Mark Zuckerberg started with a simpler product which was tested university after university until the magic solution was found. Nobody starts big from the beginning; the “greatness” comes more often from massive sweating than from great inspiration.

Yet another example is one in which the business remained in the past, despite the fact that the proposal was a visionary one: fearing the fact that users will not be optimistic about a future too different from the present & past, the founders preferred the traditional approach. This proved to be a “looser”, too.

It looks like no matter how we look at it, it all reduces to 3 questions:

One thing is clear: counter-intuitive as it may seem, the customers are not always the ones who pay. Rather, the customers are the ones we are trying to convince to adopt the product, the ones to whom the continuous improvements are addressed, the ones providing feedback when the product is in the testing phase. Sooner or later, when finally dealing with large numbers, the monetization system may change even if the "customers" were not charged in the beginning, as it was preferred to gather a large number of users via the network effect.

(2) In which market do I operate? Or "in which markets I should not operate?" it’s clearly related to the first question. The little secret is that the answers to the first two questions must be consistent especially because a startup can act differently at a given time and stage of its evolution. It can be itself an independent platform, it can be on a side of a platform, or it can act as a bridge between participants no matter on which part of the platform it is positioned. Therefore, the answer to question (2), although it does not seem so important, is determinant for the direction in which the product should be developed.

(3) What is the value proposition of the product, expressed in an easy to understand way? I should say what I can do, whom I do it for, and what are the differentiators and the source of the competitive advantage. This may sound simple, but it is at least as complicated as the first two questions. This is because until the first two answers are not coagulated and become crystal clear in the minds of the founders, a simple, out-of-context value statement cannot be the right one.

In many cases the answer to this question can be obtained the other way round, starting with those who seem to already leverage our product, even if playing a secondary role in the story. How and for whom I create real value are unknowns that get uncovered in real life, rather than in the imagination of the founders. This is what tests & feedback are for.

Without claiming that these articles provide valuable content, the intention is to share a few lessons that everyday (business) life has taught us. To validate the content, there are tests. And this editorial is a test for which we are looking forward to your feedback, too.