We got in touch with Ciprian Man from Growceanu - a principal investor in Quarks Interactive, campaign on SeedBlink, to find out more about the motivation behind his decision and details about his investor profile. 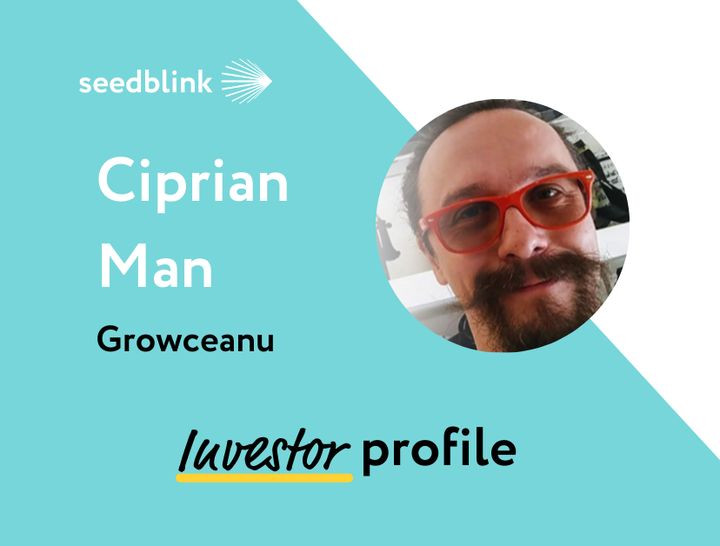 SB: Can you tell us more about your investment portfolio? What kind of investments do you generally focus on?

CM: I have started investing in start-ups through personal connections; it happens when I like the founders and the team behind that specific start-up. The selection is then made transparently, by the potential and expected impact on one hand, and scalability on the other hand.

I decide to invest when I see that the start-up has the potential to do something impactful that could change in a significant way people's lives, on a scale as a large as possible – sometime in the future, not necessarily now.

SB: Do you think about your investments as being long-term ones?

CM: Yes, although the ideal investments are both short- and long-term. If short-term, it is impressive to offer the investor the opportunity to cash out with an excellent return, but of course, much lower than what will produce in the future. Still, it is nice to have this option. Sometimes it cannot be like this, and then, of course, long-term vision and execution come first.

SB: How much of your investment budget have you allocated to Quarks Interactive?

CM: Interesting question - I would say 10%, keeping in mind that the budget is not fully used.

SB: Do you expect someone to invest in a start-up in a time of crisis? Why?

CM: Yes, now is the time. In crisis conditions, some start-ups justify the investment, because then they have the most significant impact. The prominent examples are e-learning, telemedicine, but not only.

SB: In your experience, what was your highest return of investment?

CM: I made a partial exit from the company which I worked for and invested. The return was enough so that one year after I bought the last tranche of shares to be, I was able to sell it, recovering the entire sum invested until then.

SB: About Quantum Interactive: how do you expect it will evolve and why?

CM: In an optimistic (but not aberrant!) scenario, there are several kinds of exists. We can look at hundreds when a game is successful. The startup's vision is based on Quantum Literacy (literacy in physics and quantum computing systems) for the planet - in other words, the game is only a first step - others might follow. There are discussions and partnerships with other large companies that seem to be very intrigued about Quarks Interactive's progress so far.

The game's return may be exciting, but the spectacular things may be beyond the horizon of this game. Starting from the fact that the whole world is transforming, many paradigms will be radically changed. A perfect metaphor is a transition from a Newtonian world - in which all things are distinct, and interactions are like a ping-pong game, with small clashes between separate objects – to a quantum world where all things are interconnected, and there are no rigid boundaries. People want to learn about this new paradigm that has started to integrate into how they perceive reality.

SB: What attracted you specifically to this start-up?

CM: The combination between founders and the idea. For a long time, I have been interested to learn as much as I can about quantum physics, without being enrolled in a school focused on this specific subject. I do this in an organized way; however, together with other passionate people, I study, participate in workshops and meetings. We have a group for dialogue and discussions – Pari Center – which meets several times a year, in a village, in Tuscany. More recently, we meet on Zoom!

SB: What are the strengths and vulnerabilities of this start-up?

CM: Its main strength is the uniqueness and the fact that it synchronizes very well with the transformations we are going through. Like any start-up, the risk is timing; if the world is not ready for it, and there is not enough interest yet, it is a long way forward.

The current trend is toward a growing interest in this field; the quantum computing field is growing, but it is not yet fully developed - it is in progress.

Many people are working hard, and more and more money is going in this direction.

This start-up does not count on the maturity of the technology but the popularity of the idea and the public's openness. This interest does not depend on the level of technology – science-fiction precedes reality. We did not have mobile phones when Star Trek was hip. But these questions come up from time to time: is this the moment when this Star Trek – Quarks Interactive – will become successful? Even before the technology itself becomes widely used? How hard is it to reach those few percentages of the population that are early adopters? How do we educate the market? We must win them, and then it follows the classical model and a difficult-to-pass threshold at 10-13% of the target market.

We will soon understand who these early adopters are, with the help of team gaming experts.

Read the article
Vertical Zoom-In: The demand for digital fitness

Read the article
European Ecosystem - who should I follow

Read the article
What is a diversified portfolio?

Read the article
How European investors started out

Read the article
Philosophy vs investments - Editorial by Ionut Patrahau

Read the article
Due Diligence. Specialization and professionalism - Editorial by Ionut Patrahau

Read the article
HR Tech Vertical Zoom-In: The demand for talent in tourism

Read the article
SEEDBLINK: an investors’ platform for startups

Read the article
A secondary market. From intention to certainty - Editorial by Ionut Patrahau

Read the article
Collective negotiation power: A decisive advantage when investing with SeedBlink

Read the article
The right to (re)invest in success.

Read the article
Women who tech: investing in startups

Read the article
Introduction to SAFE financial instrument & how it works

Read the article
My Portfolio & the new visual identity of SeedBlink

Read the article
Convertible Notes: A Hybrid of Debt and Equity

Read the article
B2B or B2C?

Read the article
Why should I invest in local startups?

Read the article
Startups valuation. Is there a magic formula?

Read the article
Creating and Managing my Portfolio

Read the article
INVESTING in startups